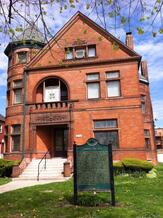 ​​Dr. Dewitt T. Burton, Francis M. Dent, Odie T. Davis, Charles Washington, David Smith and Livingston Jeffries, chartered the Nu Omega graduate chapter of Detroit, in 1923. In the early 1940s Brother George Isabel, who served as 10th Grand KRS (1937-1944), lobbied for Nu Omega as a member of the Detroit Housing Commission, to assist the chapter in purchasing a property for meetings. Brother Isabel helped make it possible for Brothers Dent, Burton, Jeffries, Davis, Smith and Washington to acquire the Historic Omega House located at 235 East Ferry, Detroit, Michigan, in 1942. This property is one of the oldest continuously owned properties by a chapter in the fraternity’s history. Nu Omega is the largest chapter in the 10th District and one of the largest in the fraternity.

Men of Nu Omega Chapter have distinguished themselves as being leaders in the community. In 1961, Brother Otis Smith served as the 1st African-American on the Michigan Supreme Court and the 1st African-American to serve as the legal counsel for General Motors in 1967. In 1963, Brother Nicholas Hood II, pastor of Plymouth Congregational Church of Christ, supervised a 2.3 million dollar housing development in the City of Detroit, which at that time, was the single largest development by an African-American in Detroit. That same year Brother Hood, as Secretary of the SCLC, assisted in organizing Dr. Martin Luther King’s March in Detroit, which was the forerunner to the March on Washington that same year. Brother Hood also served as a member of Detroit’s Common (nee City) Council for 28 years.

In 1964, Brother Robert Millender, attorney, assisted as campaign manager in the election of John Conyers to the US House of Representatives and also in the same capacity, assisted in the election of Coleman Young, the first African-American Mayor of the City of Detroit, in 1973. In 1965, Brother Dr. Charles H. Wright solicited and received from brothers of Nu Omega Chapter, the first public funding for the establishment of the Museum of African-American History in Detroit, which became the largest museum of its kind in the United States only recently surpassed by the Smithsonian Museum of African-American History in Washington DC. Brother Charles Allen become President of 1st Independence Bank in 1982, one of the largest Black-Owned banks in the United States. In 1998, Brother Walter Watkins became president of Banc One Michigan. He was the 1st African-American to serve in this capacity. Following in the footsteps of Brother Nicholas Hood, Brother Andre Spivey, pastor of St.Paul A.M.E. Church, was elected to the Detroit City Council in 2009. In keeping with the goals of the fraternity, men of Nu Omega have sponsored many projects for the improvement of Detroit's African-American community. Several noteworthy projects include the granting of college scholarship awards to deserving students and sponsoring a national talent hunt directed at seeking students with outstanding musical ability. Over the years Nu Omega has donated in excess of $500,000 to the United Negro College Fund.

Detroit Pioneers
From the very inception of our fraternity Omega men have been prominent in the fields of health and science.  Starting with our founders a direct line of heritage can be traced to the many Omega Men working in the fields of health and science today.  This distinguished lineage passes through Nu Omega.  In 1923 Brother Burton along with Francis Dent, Odie T. Davis, Livingston Jeffries David Smith and Charles Washington, chartered the Nu Omega Chapter of the Omega Psi Phi Fraternity.  Dewitt Talmadge Burton was born in Memphis Tennessee on the 15 November 1892.  He attended Fisk University after graduating from Kortrechet High School. He graduated from Meharry Medical School in 1920. He began his practice in 1921 here in Detroit Michigan.  When he began his practice he used his bedroom as an office and a surgical suite.  He was the founder and owner of Burton Mercy Hospital at 271 Eliot Street in Detroit. He was also one of the founders of Parkside Hospital which was located at 3764 Brush Street in Detroit.  Burton was the first black person elected to the board of governors of Wayne State University in 1959.  Brother Burton served on the Meharry Medical College Board of trustees and was a member on the National Board of Directors of the United Negro College Fund.  He served on many other civic boards including the United Foundation, World Medical Relief Organization, the Boy Scouts of America and the Detroit Urban League. He was a life member NAACP and member of the Citizen Advisory Committee on School needs in Detroit.  He served as Chairman of the council on Political Education of Detroit, and the United Detroit Leadership Conference.  He founded the D.T. Burton Research Fund for medical investigation to help investigate health problems in the Negro community.  His honors include being cited for outstanding civic leadership by the by the NAACP in 1958 and Michigan chronicle 1959.  The Booker T Washington trade association also honored him as Citizen of the year. He was inducted into the Sigma Pi Phi fraternity in 1958.